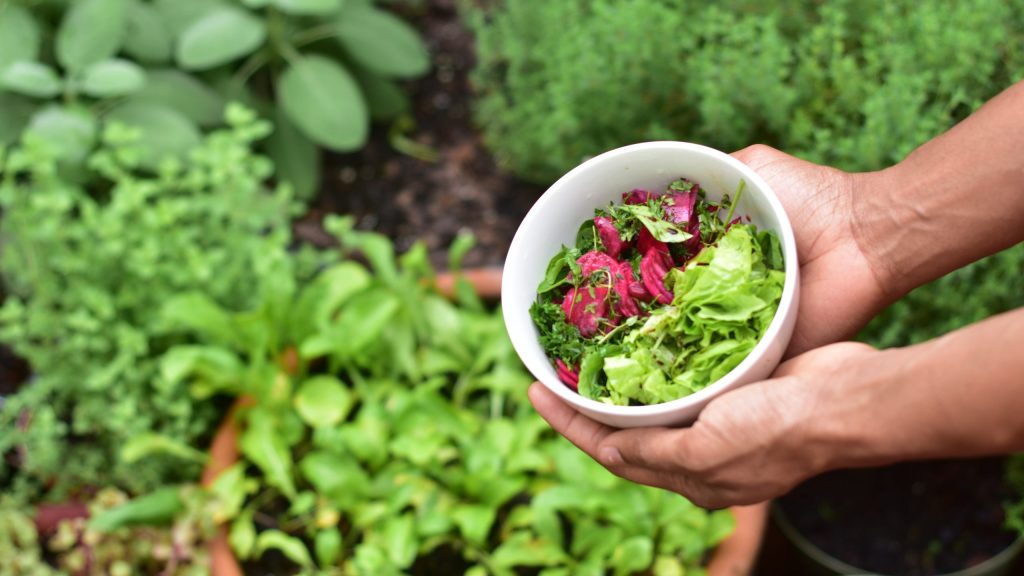 Hello! Alexis Irvin here again, Communications and Outreach Intern with the UF Office of Sustainability. As an environmental science student, I frequently find myself in conversations about sustainable agriculture and the benefits of plant-based diets. Based on the most recent global data available at the time, the Intergovernmental Panel on Climate Change published a 2014 report stating that 24% of global greenhouse gas emissions were linked to agriculture and land use, which includes those related to the production of beef.

Despite these daunting numbers, one of the many ways you and your friends can live a more sustainable lifestyle is by swapping the meat in daily meals for plant-based alternatives, even as little as one day per week. Not only is incorporating more plant-based foods into our diets good for our health, but it is also good for the planet. Dana Hunnes, Ph.D. at University of California, Los Angeles, explains that substituting animal products for plant-based ones not only reduces carbon emissions but also reduces water use and waste byproducts.

With the environment in mind, even if you’re simply looking for some new recipes, join me and Sustainable UF in starting the fall semester with the August Action of the Month: Meatless Mondays!

According to Yale’s Climate Change Communication program, food production contributes largely to biodiversity loss, deforestation, freshwater use, and land use change, which all have significant implications for carbon emissions and climate change.

The carbon emissions released through these processes contribute to the known greenhouse gas effect in which greenhouse gasses (like carbon dioxide) build up in the atmosphere, acting like a blanket and trapping heat around the planet. With this warming being the primary cause of climate change, reducing carbon emissions by limiting harmful processes is key to a more sustainable planet.

The use of land for agriculture and food production is proven to damage the environment because it limits the land’s ability to act as a natural carbon sink (i.e. its ability to absorb carbon from the atmosphere). The 2019 Climate Change report commissioned by the United Nations documents that 29% of man-made greenhouse gas emissions are absorbed by land (i.e. carbon sink). Without careful monitoring of use and production though, this carbon sink will become a “carbon source”- a process that releases carbon into the atmosphere. Considering the production of plant-based foods such as legumes, fruits, vegetables, nuts, and seeds involves much less land and carbon-intensive farming practices, these foods offer a more resilient and sustainable alternative for meat production. On average, plant-based foods result in 10 to 50 times less carbon emissions compared to meat and animal products.

To reduce the environmental impact of deforestation and carbon emissions, addressing food production and waste is critical in mitigating the impacts of a changing climate.

Where’s the Beef (and Water)?

Similar to the sustainability concerns surrounding carbon emissions, meat production has also been proven to be a significant stressor on water supplies. Production of one pound of beef alone requires 1,800 gallons of freshwater, with agriculture in general using 70% of freshwater available for consumption around the world.

Understanding the amount of water that goes into producing everyday foods, also known as a water footprint, is an important step towards making more sustainable food choices. Learn more about the components of a water footprint in this video from Denver Water!

To decrease your carbon and water footprint and support the August Action of the Month, I challenge you to try out some of these quick and easy beef substitutions to jazz up any classic recipe:

Still not sure where to start? Check out one of my favorite beef-less recipes from a recent UF graduate to start your #MeatlessMonday journey: https://www.lizzieshutt.com/plant-powered-recipes/recipe/9c17e868-ad46-440a-a0d5-52938f014fd7

What’s the hype about oat milk?

Plant-based diets not only help protect the environment but may also serve as a preventative measure to battle some human diseases as well. Animal products and by-products are relatively high in substances such as trans fatty acids, raising concern from cardiologists diagnosing diabetes and other cardiovascular disease events throughout the United States. Doctors studying preventative cardiology have found that plant-based diets are associated with lower risks of diabetes, hypertension, and other diseases that impact large portions of the population.

The idea of supporting sustainable initiatives and promoting good heart health is not only favored by doctors but consumers as well. In response to the social media trends, oat milk has filled the shelves next to other non-dairy options with brands such as Oatly, Califia Farms, and others releasing flavored versions of the beverage. But oat milk’s nutritional benefits (low in fat, sugar, and cholesterol) is not the only reason it has also gained popularity; the product also addresses environmental concerns surrounding depletion of water resources. Unlike almond milk, which requires approximately 314 liters of water (~83 gallons) to produce one liter of milk (~¼ gallon), oat milk only requires 48 liters of water (~13 gallons). Compared to its dairy counterpart, oat milk also requires ten times less land to produce than dairy milk, while also contributing much less to greenhouse gas emissions.

However, it should be noted that both almond and oak milk still require less water to produce than the typical glass of dairy milk. That’s worth the hype!

While reducing meat consumption has many benefits for both individual and environmental health, communities play an important role in growing the impact. It is estimated that moving toward more plant-based diets could reduce global mortality by 6–10% and food-related greenhouse gas emissions by 29–70% compared to business as usual. The global Meatless Monday campaign supports people around the world with tools and resources for reducing meat consumption and promoting plant-based diets. The Meatless Monday campaign acknowledges that small actions, such as cutting out meat one day per week, have even greater benefits on a community scale. Whether you are already eating plant-based foods or are just starting Meatless Mondays, consider growing your impact by encouraging friends, family or colleagues to join! Check out the multiple resources provided by Meatless Mondays for schools, workplaces, cities and communities.

There’s no hiding that the American food system is reliant on meat production, but there are many ways that you can take action to help decrease your carbon footprint and encourage others to do so as well. To learn more about sustainable agriculture and what you can do to help:

Category: Action of the Month