New Look for the UF Office of Sustainability! 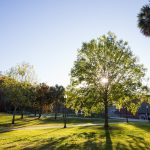 Welcome to the new website for the University of Florida Office of Sustainability! We have been working diligently to revise and restructure our website to make it easier for visitors to navigate and stay informed. Browse the Campus Initiatives tab to learn more about what UF is currently doing to further sustainability on campus. Look […]

Join Sustainable UF on campus this Sunday, October 21 from 9:30 am – 12:30 pm as we host our Fall Green & Clean Event at Harmonic Woods/Lake Alice Conservation Area. This event is part of our Tree Campus USA efforts, and helps ensure that our campus conservation areas are kept clear of litter, recycling and […]

Congratulations to the 2018 Recipients of the Champions for Change Awards

The following people and programs were selected in 2018 to receive Champions for Change awards for their significant contributions in the areas of Sustainability or Health & Well-Being. Sustainability: Marianne Schmink Marianne is the co-founder of the Community Weatherization Coalition, an organization that provides free energy audits to low-income residents in an effort to conserve […]

RecycleMania is a national competition that puts colleges and universities across the country head-to-head to see who can recycle the most. It is an opportunity for University of Florida to shine while encouraging and educating students,faculty and staff on the value of recycling! How can you be a part of RecycleMania at UF? Remember to […]

Congratulations to the 2017 Recipients of the Champions for Change Awards

The following people and programs were selected in 2017 to receive Champions for Change awards for their significant contributions in the areas of Sustainability or Health & Well-Being. Sustainability: Florida Microplastic Awareness Project “The Florida Microplastic Awareness Project (FMAP) is a statewide effort, spearheaded by Dr. Maia McGuire (UF/IFAS Extension Flagler County Sea Grant agent) […]

December 1, 2016 On November 29, the League of American Bicyclists announced 51 new and renewing Bicycle Friendly Universities℠ (BFUs)  from 25 states, There are now 164 BFUs in 44 states and Washington, DC, a cutting-edge group of colleges and universities across the United States transforming their campuses and the communities around them. List of […]

Graduation is a moment of pride and excitement. Students are proud of their academic achievements and the fulfillment of a life goal. But what if graduation could mean more than just obtaining a degree? What if it was an opportunity to proof to others you care about the environment? The Green Cord Challenge, a program […]

The University of Florida Physical Plant Division (now Facilities Services) was awarded the 2016 Recycle Florida Today (RFT) Environmental Sustainability Award for its Organics Diversion program at the annual conference in St. Augustine on June 14. Over the past year, the university invested in extensive planning and routing revisions, as well as new equipment, to […]

Deadline extended for the 2020 Champions for Change Nominations!